One day Doraemon, Nobita, Shizuka, Gian and Suneo were shooting a film as space heroes. When they were shooting the film in the open lot a boy called Aron comes and alerts them of aliens attacking his planet. They agree to help him by turning into real superheroes, but it isn't as easy as it looks.
Do you like these movies?

I Wanna Hold Your Hand 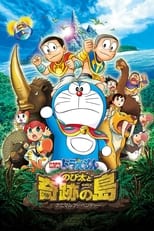 Doraemon: Nobita and the Island of Miracles - Animal Adventure

Blade of the Immortal