Monty Python’s Flying Circus is a British sketch comedy series created by the comedy group Monty Python and broadcast by the BBC from 1969 to 1974. The shows were composed of surreality, risqué or innuendo-laden humour, sight gags and observational sketches without punchlines. It also featured animations by Terry Gilliam, often sequenced or merged with live action. The first episode was recorded on 7 September and broadcast on 5 October 1969 on BBC One, with 45 episodes airing over four series from 1969 to 1974, plus two episodes for German TV. The show often targets the idiosyncrasies of British life, especially that of professionals, and is at times politically charged. The members of Monty Python were highly educated. Terry Jones and Michael Palin are Oxford University graduates; Eric Idle, John Cleese, and Graham Chapman attended Cambridge University; and American-born member Terry Gilliam is an Occidental College graduate. Their comedy is often pointedly intellectual, with numerous erudite references to philosophers and literary figures. The series followed and elaborated upon the style used by Spike Milligan in his ground breaking series Q5, rather than the traditional sketch show format. The team intended their humour to be impossible to categorise, and succeeded so completely that the adjective "Pythonesque" was invented to define it and, later, similar material. 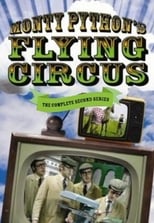